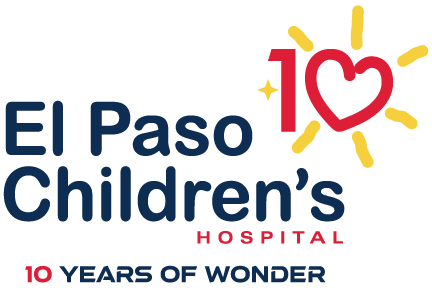 This is our hospital!

Our Mission
The Mission of El Paso Children’s Hospital is to provide compassionate, coordinated, family-centered care for children with a dedicated commitment to excellent patient outcomes, inclusive leadership and innovative pediatric research and education.

Our Vision
The Vision of El Paso Children’s Hospital is to enhance the lives of children from the greater El Paso area and surrounding region by providing a place of hope and healing through unmatched excellence in pediatric patient care, research and education.

Our Core Values
These core values reflect our passion for quality care and how we serve patients, families, employees, and our community.

Healing Environment:
We create a unique and nurturing environment by fostering teamwork and shared decision making through the practice of family centered care, including age appropriate comfort measures.

Excellence:
We strive for excellence in quality, service, and leadership. We continuously learn and work to improve our skills, programs, and services.

Accountability:
We are accountable to fulfill our mission of serving children and their families. Every role makes a difference.

Respect & Dignity
We honor and value the individuality, diversity, and contributions of our patients, families, and each other.

Transparency:
We communicate by sharing and receiving information that is timely, instructive, and empowering.

1993 A group of concerned citizens began the groundswell in 1993 when they approached Providence Memorial Hospital, then a not-for-profit, and said, “This is an unmet need.” Providence then commissioned the first study. It looked promising and enthusiastic fundraising efforts began. But Providence started talking to Tenet in 1994. The hospital was sold to the healthcare giant in 1995 and became a for-profit hospital.

1995 When Providence abandoned its plans for a Children’s Hospital, the group turned to Columbia/HCA, which operated two hospitals in El Paso. Columbia conducted the second feasibility study and liked what they saw. The company purchased land next to one of its local facilities, tore down an apartment building to make way the facility, and held a groundbreaking ceremony. But less than three weeks later, Columbia faced a fairly cataclysmic financial disaster that impacted Colombia-owned hospitals nationwide. Once again, local plans for a Children’s Hospital were derailed.

2003 In the eight year gap between 1995 and 2003, a group of prominent El Pasoans began laying the groundwork for Texas Tech to expand its local presence from a Health Sciences Center to a full-fledged, four-year Medical School. In the interest of avoiding conflicting efforts, the Children’s Hospital was put on the backburner to focus the community’s attention on convincing the state legislature to approve the Medical School. During the session, funding for the project stalled. It was at that point that advocates for the Children’s Hospital approached Thomason Hospital seeking support for yet another feasibility study. It was conducted in 2003.

2004 The results of the study were reviewed by Deloitte in 2004. It became clear that this was not the time in Thomason’s history to consider a Children’s Hospital. Thomason was facing serious losses on an annual basis.

Mr. Valenti, Hospital District Board Chairman Ron Acton and Finance Chair Steve DeGroat approached the results of the 2007 Children’s Hospital study with great candor. A battery of outside experts was employed to verify every key legal and financial finding in the study. It soon became clear that if El Paso was ever going to have a separately licensed Children’s Hospital, now was the time to proceed.

Interestingly, all five of the studies agreed on the following:

Armed with the information that local voters would need to finally decide the issue, advocates for a Children’s Hospital began a full-fledged campaign to win voter support.

Dramatically Underserved Pediatric Community- Pediatricians take care of coughs and colds; pediatric subspecialists stay in school for a few more years of training to develop special knowledge and expertise in areas such as pulmonology, cardiology, urology, and oncology.  If you’ve ever had a seriously sick baby, you were probably sent to see a pediatric subspecialist.

In El Paso, approximately half the pediatric specialties were represented and half were not.  Except for in a few areas, our city had only one practicing physician in each specialty.  That meant that every pediatrician was on call 24 hours a day, 7 days a week. Eventually many of them became burned out and moved to communities where they would be better supported. It became clear that our children weren’t getting the care they deserved.